It’s been a long time, but AKIN is excited to announce that we are relaunching our monthly public meetings! For now, these meetings will be held via zoom.

Whether you’re new to AKIN or a long-time friend, this meeting will be an opportunity to learn about what’s new (and old) with police-ICE collaboration in Knox County, hear about the lawsuit against Knox County for illegally participating in 287(g), and spend time reconnecting with one another.

All who care about the rights and dignity of immigrants are welcome.

On September 7, 2021, AKIN sent a formal complaint to DHS Secretary Alejandro Mayorkas, calling on him to act within his authority to immediately terminate Knox County’s unlawful 287(g) program.

ICE relies on local law enforcement agencies to increase the federal government’s capacity to identify, detain, and deport immigrants from the United States. Analysis of Knox County Jail data indicates that the vast majority of immigrants who are arrested within Knox County on criminal violations and held for ICE are charged with misdemeanor and nonviolent offenses. In this virtual press conference, local speakers will discuss the role of Knox County law enforcement in the federal deportation system.

Hammad Sheikh, local immigration attorney, will discuss the federal immigration detention system and what happens to immigrants once they leave the Knox County Jail.

Charlie Mulligan and Tonya Barnette, representatives of Weekly Witness, will discuss their experiences in two years of witnessing routine immigration check-ins at the ICE Office in Knox County.

The press conference will last for 30 minutes, followed by Q&A from members of the public.

Please join us on Friday, September 25 at 11 am on AKIN’s FaceBook Live to watch the virtual press conference.

In May, Sheriff Spangler renewed Knox County’s 287(g) program, which authorizes his officers to enforce federal immigration law. The renewal of 287(g) will have dire consequences for our community. As an immigration attorney practicing in Knox County, I see how this voluntary program has pushed an already vulnerable population to even greater risk. It is a mistake for our Sheriff to harness our county’s limited resources to the severely compromised federal apparatus of mass detention and deportation. And in this unprecedented time of pandemic, Spangler’s mistake is even more dangerous.

Undocumented immigrants are an essential part of the Knoxville community, economy, and culture. Unfortunately, they are also particularly vulnerable during the COVID-19 pandemic. Even as most businesses were shuttered and their workers admonished to shelter-in-place, many undocumented immigrants were deemed “essential” workers. The invisible yet critical labor of our undocumented neighbors continues as they work in our fields, our factories, our restaurants, at large and small businesses across the county, caring for our old and our young, and even delivering food and medicine for those of us unable to travel.

We cannot overlook the vital role undocumented people play in our community, nor the risks they face. The threat of deportation hovers over undocumented people whenever they leave their homes, whether they are driving to work or taking their kids to the doctor. In Knox County, because of 287(g), minor traffic infractions can permanently separate an undocumented person from their family. Once arrested, an undocumented immigrant can be sent to a detention center far away. If the detained person is allowed to reunite with their family while awaiting the outcome of their case, they will expend $6,000 to $8,000 for an immigration bond alone. The family separation, the financial strain, the emotional trauma of being put in jail for months is unjust for a traffic infraction, especially when the local government’s participation in 287(g) is optional.

The Sheriff’s participation in this voluntary program is especially egregious in the midst of a pandemic, when conditions of immigration detention centers are particularly horrifying. One immigration judge, a military veteran, explained: “I’ve never witnessed an utter lack of concern for people like I have here. In my former life, we treated captured Taliban and ISIS with more humanity.” The National Association of Immigration Judges has made an urgent call to require implementation of health and safety measures at detention facilities. Sheriff Spangler’s renewal of 287(g) during the pandemic demonstrates a disregard for the health and safety of immigrant detainees.

There is no evidence that 287(g) decreases crime. In Knox County, 80.8% of inmates with ICE holds are non-violent offenders. In fact, 287(g) undermines public safety by effectively silencing undocumented people when they are victims of crime. Undocumented people are less likely to report crimes committed against them because they fear calling police could lead to deportation. I have seen this happen numerous times with my clients who face grave danger or abuse; they are afraid to call the police for help. Similarly, 287(g) deters undocumented people from seeking medical care because they fear potential interactions with law enforcement. 287(g) makes us all less safe by placing our vital undocumented neighbors in compromising circumstances.

Nationwide, the overwhelming majority of law enforcement agencies have declined to participate in 287(g); in Tennessee, only two of 95 counties participate. Elsewhere, extensive legal action has been taken to limit the use of 287(g), and local governments are forced to defend the program with taxpayer dollars. In North Carolina’s Mecklenburg County, the estimated cost of the first year of their 287(g) program was $5.3 million. Sheriff Spangler has not disclosed the cost of his 287(g) program to Knox County taxpayers.

Life is uncertain; heartbreaking tragedies await all of us. For those invisible and vulnerable among us, 287(g) causes tragedies and crushing heartaches. As an immigration attorney, I see the grave consequences of 287(g), including the fears of undocumented people and their separation from loved ones. Sheriff Spangler insists that people who oppose 287(g) do not understand how it works. However, I am shocked by his renewal of the program precisely because I understand the deep tragedies it causes.

Neither the Sheriff’s Office nor ICE has released a copy of the 287(g) memorandum of agreement (MOA) signed in May 2020. If you are interested in reviewing the recently signed contract, you can view it here: Knox County 287g MOA May 2020

One significant change from previous signed agreements is that the 2020 MOA does not require renewal; rather than expiring after one or two years, the current contract will exist in perpetuity. Sheriff Spangler – or ICE, for that matter – can still withdraw from the 287(g) program at any time.

On Wednesday, May 13, Sheriff Spangler revealed that he had renewed 287(g), a voluntary federal program that allows corrections officers in the Knox County Jail to enforce federal immigration law. The contract was set to expire on June 30.

Sheriff Spangler is well aware of the community’s concerns about this program. Over the last four weeks, groups and individuals have reached out to the Sheriff’s Office to urge him to decline to renew the contract. These efforts include:

The Sheriff has repeatedly dismissed community concerns by saying that we don’t understand the program and how it functions. It is the height of hypocrisy for Sheriff Spangler to argue that our concerns stem from a lack of understanding while simultaneously withholding access to data, records, and public information about the program. Since his time in office, Sheriff Spangler has not held a public meeting about 287(g), despite a KCSO 287(g) Steering Committee Charter which calls for a yearly public meeting to “hold effective and meaningful dialogue with community stakeholders.”

AKIN believes that 287(g) and other forms of police-ICE collaboration threaten the well-being of our community. The vast majority of immigrants held in the Knox County Jail were arrested on nonviolent misdemeanor offenses. Because of 287(g), these misdemeanor offenses may result in major immigration consequences for immigrant residents of our community.

If Sheriff Spangler believes that he has pertinent information to increase community trust and support for this program, he should make it known publicly. The Sheriff should stop hiding from community scrutiny.

Knoxville – Since mid-April, community members have urged Sheriff Spangler to end the 287(g) contract when it comes up for renewal again this year. The contract, which allows corrections officers in the Knox County Jail to enforce federal immigration law, expires on June 30.

On Friday, May 15, Knoxvillians will gather for a physically distant car rally to publicly call upon the Sheriff to end 287(g) and affirm Knox County as a welcoming community.

In the weeks leading up to the rally, individuals and groups have reached out to the Sheriff’s Office to express their concerns about the program. These efforts include:

With Knox County’s 287(g) contract set to expire in a matter of weeks, 2020 is the perfect time for Sheriff Spangler to step back from this program. Today, with greater urgency than ever, community members join to demand that Sheriff Spangler end this unwise, unjust, and unneeded program.

Welcome to week three of our physically distant #end287g campaign, in collaboration with ICE out of East TN and Students for Migrant Justice! Every week until mid-May, we will ask you to take action to urge Sheriff Spangler to end Knox County’s 287(g) program.

This week, we are asking folks to do two things:

First: Post a message to #end287g on social media and tag the Sheriff. Read on for a summary of this action, or click here for more details in English and Spanish.

For this action, we are asking artists of all ages and skill levels to create a poster, drawing, painting, slogan, sign, chalk art, or any other art that represents the cultural richness, diversity, and loving community of the Knoxville area. 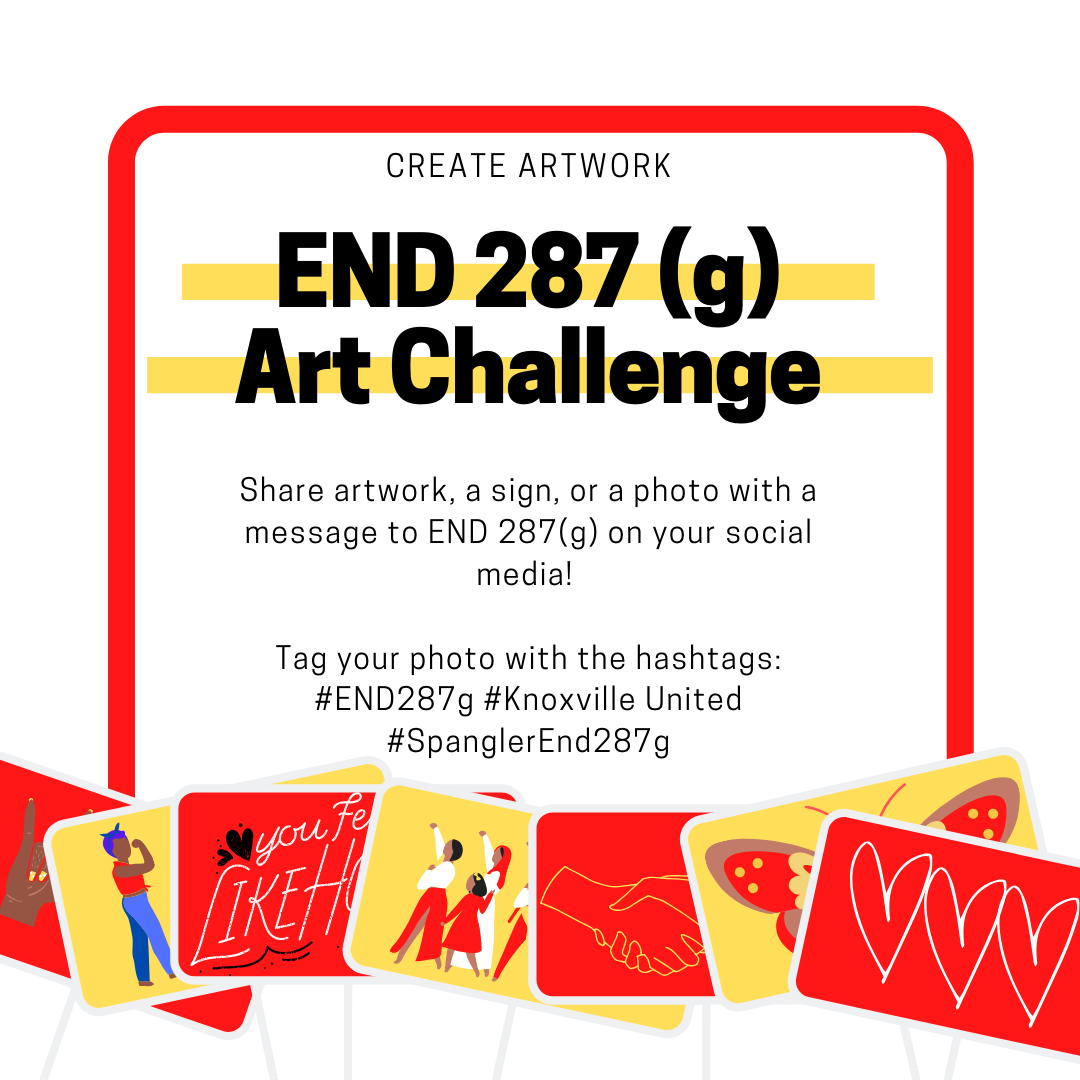 Here are some suggested messages for your art:

Second: Add your name to one or more sign-on letters against 287(g). These letters are different from the petition we asked you to sign during Week 1. Each letter is written by Knox-area representatives of various communities, constituencies, and vocations, and each offers a particular perspective on why Sheriff Spangler should end 287(g). All letters will be delivered in mid-May, during the final week of the present campaign.

The letters we know to be circulating at this time are:

Click any of the links above to read and sign any letters that represent the constituencies to which you belong.

After you take action, please encourage five friends to do the same!

This week, add your name to one or more sign-on letters against 287(g).

These letters are different from the petition we asked you to sign during Week 1. Each letter is written by Knox-area representatives of various communities, constituencies, and vocations, and each offers a particular perspective on why Sheriff Spangler should end 287(g). All letters will be delivered in mid-May, during the final week of the present campaign.

The letters we know to be circulating at this time are:

Click any of the links above to read and sign and letters that represent the constituencies to which you belong.

AKIN is a network of people in the Knoxville, TN area who work on issues related to immigrant rights. To find out more, including how to get involved, click here.